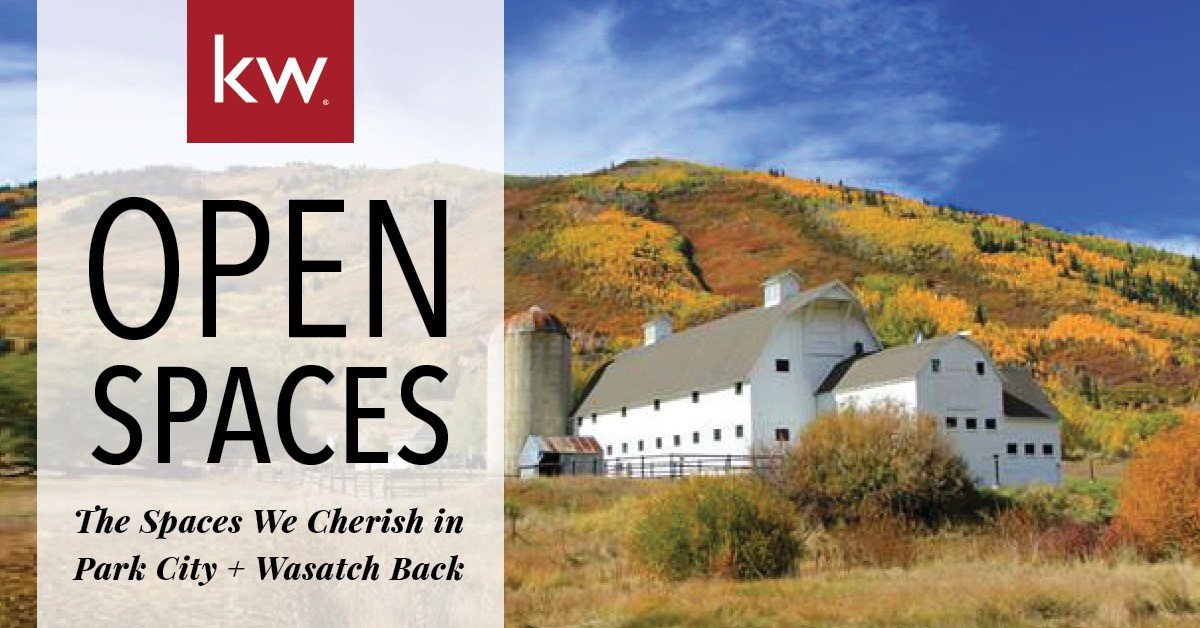 The “big white barn,” which is officially named the McPolin Barn, has become the iconic image representing Park City. Set off of Highway 224 along the creek, the barn, and surrounding lands welcome all to Park City. Amidst the backdrop of Park City Mountain Resorts ski trails, it harkens back to a simpler life once embraced by our early settlers.

In the late 1980’s, the Osguthorpe family purchased the farm from the McPolins. They operated a dairy operation and found it increasingly difficult to compete with large corporate dairy businesses. Concurrently, there were rampant rumors of attempts by developers to acquire the property, as this time period was marked with excitement surrounding the collective “hunch” that we’d be successful in our bid for the 2002 Winter Olympics. In 1990, with what became the start of the region’s focus on open space, Park City acquired the barn and surrounding lands. The city ultimately bought both sides of the property along Highway 224 in two separate acquisitions. The price tag was $6 million, which seemed high back then, but now it is recognized as a bargain. Today, the barn and the wide-open spaces surrounding it are enjoyed by many, and it stands as a monument to a community that both values and reveres open spaces as well as the multitude of ways to enjoy them.

Another huge step forward in enjoying open space occurred in 1990, when a passionate young woman named Wendy Fisher was encouraged by Park City’s leadership to form the Summit Land Trust (now the Conservancy). To date, it has preserved over 6,992 acres of land. Wendy Fisher ran the organization so skillfully that demand for her expertise cropped up all over the state.

Wendy ultimately went on to lead Utah Open Lands as a statewide land trust, turning the Summit Land Conservancy over to Cheryl Fox’s leadership in 1998. Cheryl has since built a phenomenal team of professionals. And yes, like just about everything Park City related, there are dogs with key roles in this organization, too. Learn more here.

CONSERVATION EASEMENTS AND STEWARDSHIP
Conservation easements are a vehicle for ranchers, farmers, and significant land holders to, in essence, “donate” their lands for public enjoyment in a financial arrangement. The arrangement provides significant tax advantages to the party donating the land, with the Conservancy or Trust then becoming the steward of the property.

Typically, additional fundraising is required with every municipally funded conservation acquisition. This funding is often received through complex public and private partnerships along with, of course, our very generous taxpayers.

Once land has been successfully transferred into a Conservancy or Trust, partnerships with beloved organizations, such as Mountain Trails Foundation, begin the work of ongoing stewardship. This stewardship includes maintenance of the lands and oversight of public use and access.

We are so fortunate that we live in a community where acquiring lands for recreational or preservation purposes is a key focus for constituents. As land values and development pressure continue, bonding for open space is a viable instrument of choice augmented by public philanthropy. Here are a few of the significant acquisitions and land donations/conservation easements that we all know and love. This is a partial list of the major open space collaborations.

Created initially through a generous donation by the Gilmore family, Round Valley provides almost 694 acres of contiguous recreational open space and is considered by many locals to be Park City’s playground. The area boasts over 30 miles of high desert trails, which provide early and late season riding opportunities. Moreover, during the winter months, approximately 15 kilometers of groomed trails are made available for snowshoe and Nordic skiing enthusiasts.

The Swaner Eco Center is a nature preserve and Utah State University Distance Education site located in Snyderville Basin. Swaner encompasses a 1,200-acre wildlife refuge, a 10,000-square-foot state of the art environmental education facility, a 100-acre farm, and 10 miles of trails. This huge swath of land at Kimball Junction, bordered by Ranch Place/Silver Springs to the south and Old Ranch Road to the east, might have been a sea of rooftops.  It was generously donated by the Swaner Family Trust. Leland S. Swaner purchased the Spring Creek Angus Ranch in 1957 and operated it for 35 years. In 1993, the Spring Creek Angus Ranch Partnership donated 190 acres in memory of Leland Swaner which established the Swaner Memorial Park foundation. By 1999, the Preserve grew to more than 1,200 acres. This was thanks to the donation of seven additional parcels of land and the purchase of the Wallin Farm, the small white barn off Hwy 224 just north of Ranch Place. In 2010, the Swaner Preserve and Eco Center gifted the preserve to Utah State University for ownership and oversight.

Funded in 2016 through a voter bond and cooperation with municipalities in Salt Lake County and numerous non-profits, this spectacular parcel of land encompasses 1,534 acres at the top of Big Cottonwood Canyon, tucked between Guardsman Pass, Peak 10,420, and the Park City ridgeline. It’s home to the wildly popular Wasatch Crest Trail, Bloods and Lacawaxen Lakes, and provides dog-friendly hiking, backcountry skiing, and spectacular foliage and wildlife.

This 163-acre ranch in Kimball Junction was preserved in 2005 by Utah Open Lands. The Hi-Ute Ranch is a last vestige of significant open space in Summit County, remaining unaltered from the pioneer era, through two world wars, and the 2002 Winter Olympic Games.

Nestled on the western edge of Thaynes Canyon lie 173 acres of preserved pastureland and significant mountainside acreage offering public trails, including the beloved Armstrong Trail. This significant preservation protects view corridors in perpetuity from many residences in Thaynes Canyon.

Park City voters overwhelmingly approved a $48 million ballot measure in 2018 to fund most of the cost of the acquisition of the Treasure land owned by the Sweeney Family and others. This huge swath of hillside land overlooking Old Town borders the route of the Town Lift. This conservation deal ended more than three decades of uncertainty about the acreage in what was one of the most significant moments of the community’s development disputes and open space discussions. Currently, access and appropriate usages are being mapped out by Park City.

This 158 acre parcel was preserved in 2019 via sale of a conservation easement to Summit Land Conservancy, which preserves the property as a working farm and visual amenity to the rural Old Ranch Road neighborhoods.