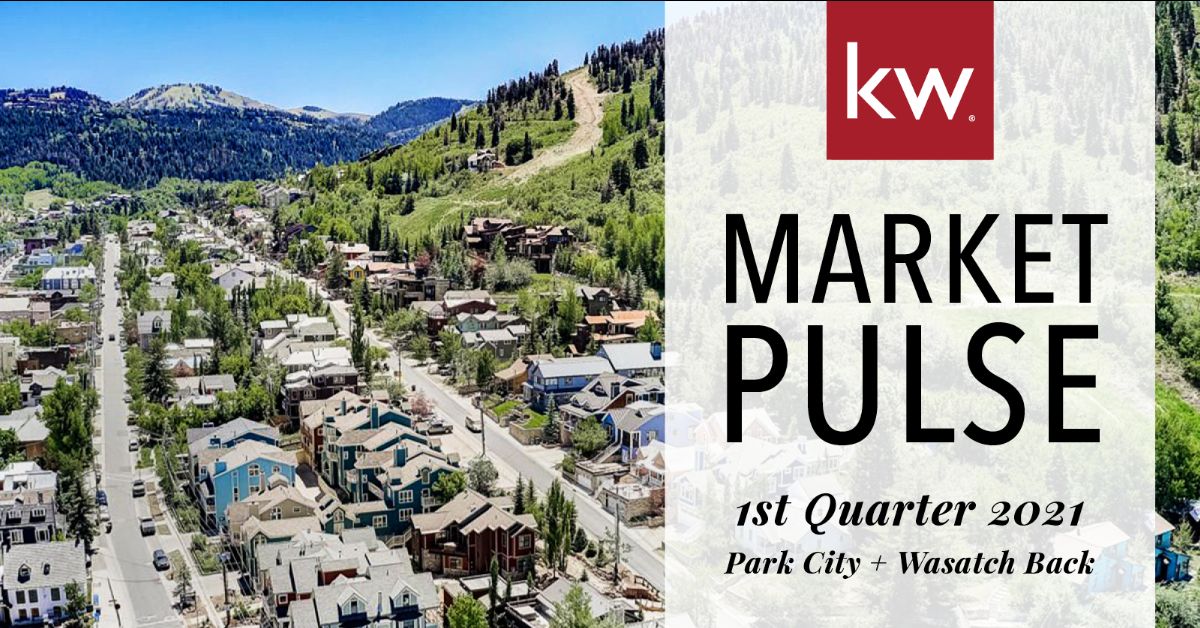 The remarkable rise in the number of homes sold and the increase in median and average sale prices that we experienced in the latter half of 2020 continued unabated through the first quarter of 2021. Fears that the market might be overheated were quelled by consistent financial indicators pointing to a sustained bull market in housing.

Optimism about the housing market is high nationwide. While we did see small gains in inventory coming into 2021, pending contracts far outstripped new listings coming to market. The Park City Multiple Listing Service recorded record low inventories in March and April, and the numbers continue to decline during a spring market when one would expect more homes offered for sale, not fewer. The number of “off market” transactions has increased significantly as well. 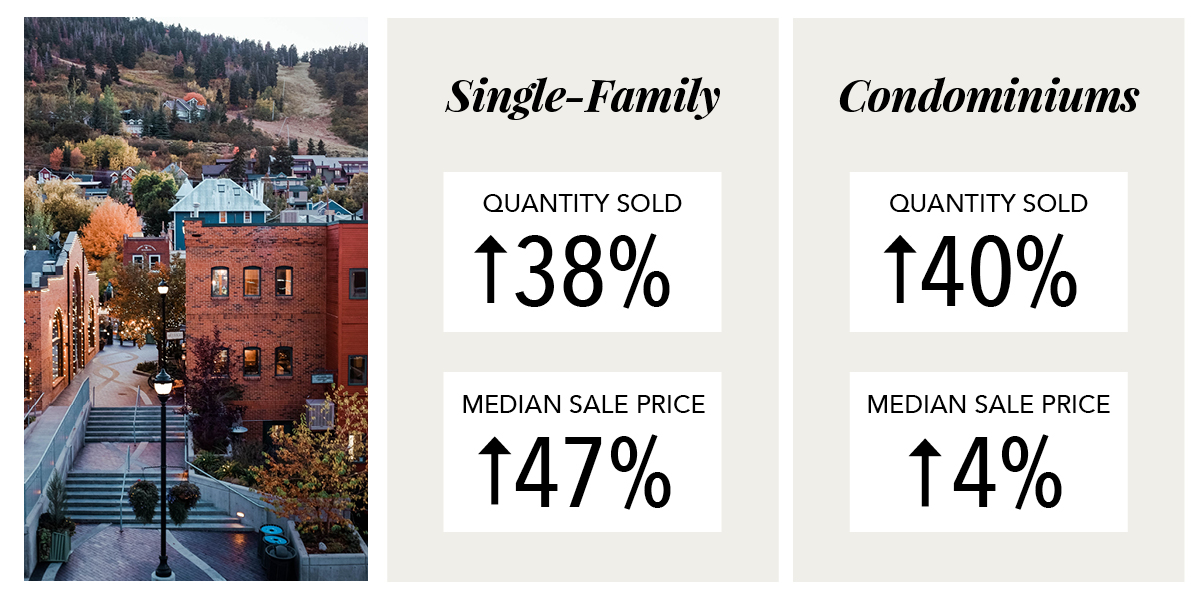 Some neighborhoods in our area performed better than others during the first quarter of 2021, but there were no negative results to report. Comparing the 12-month period ending March 31, 2021 to the same period in 2020:

How did our local real estate market fare through twelve full months of a pandemic? See below for the total year-long results, reported on a rolling year-over-year basis for the period ending March 31, 2021, unless otherwise noted. 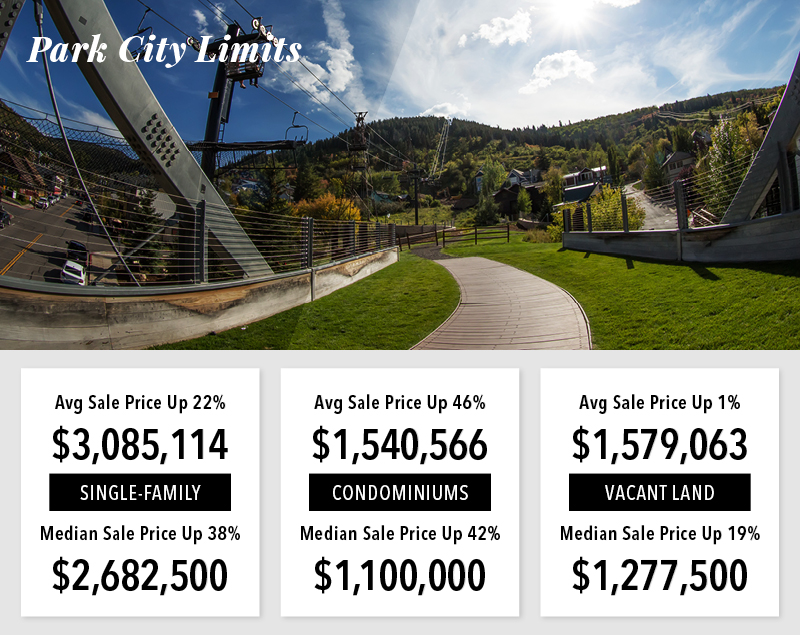 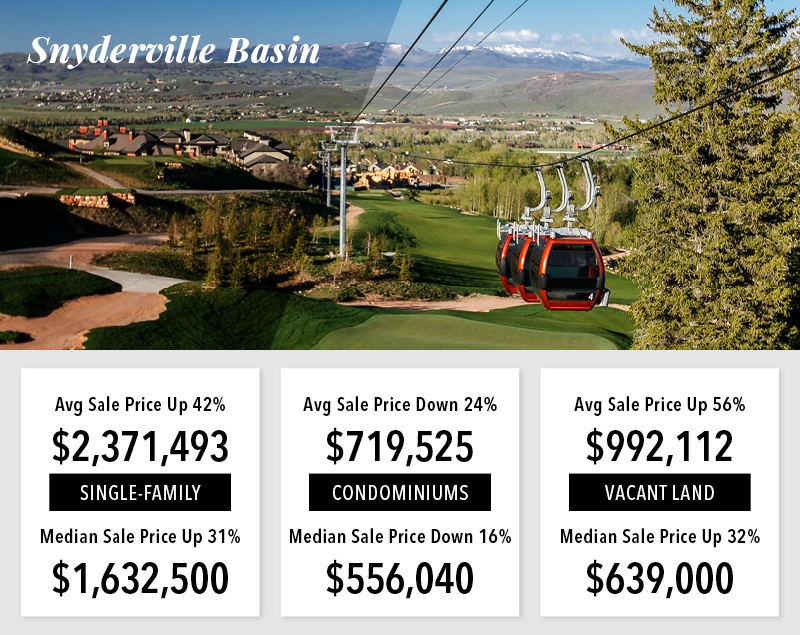 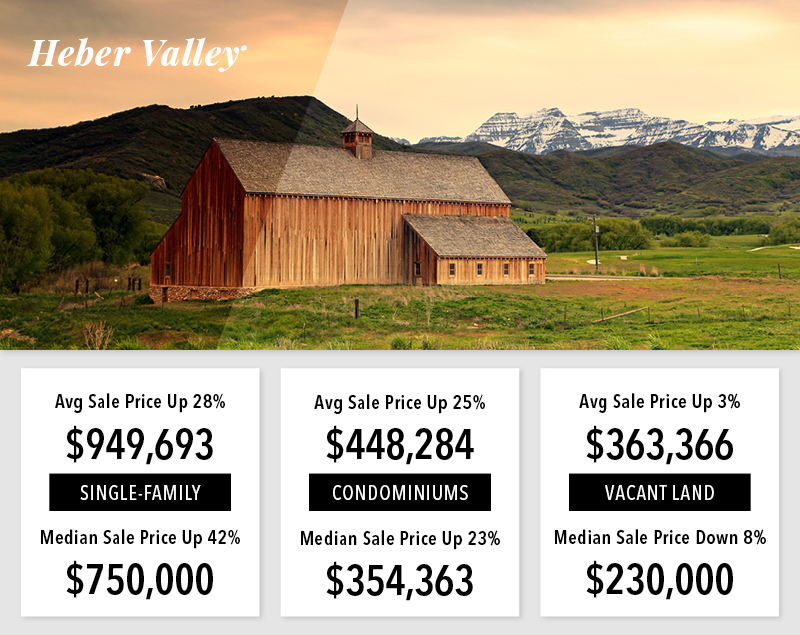 Not all sold data in the Heber Valley is included in the Park City Multiple Listing Service data; please call for more specific details. 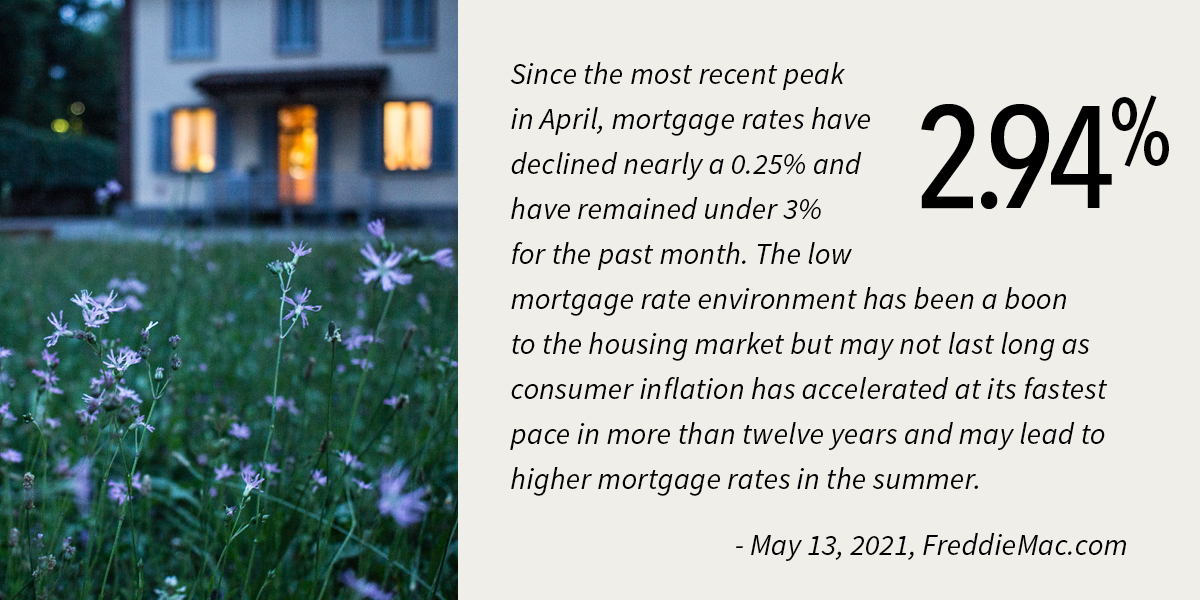 Within Park City Limits, total transactions were up 38% over 2020 to 324. Sales volume was up to $999 million, representing a 122% increase year-over-year. The median price of a single-family home across the city rose 38% to $2.7 million. In the popular Old Town area, sales volume and transactions both doubled, and the median price rose 11% over 2020 to $2.1 million. The Aerie neighborhood took the grand prize for greatest increase in median price, nearly doubling over the year earlier to $3.3 million.

Promontory led the neighborhoods in the number of transactions (153, up 113%) and dollar volume ($435M, up 165%). Glenwild saw the biggest price increase, with the median in that neighborhood passing $3.5M, up 56% year over year.

Some of the most active hotspots were south and east of the Park City metro area. Jordanelle saw vigorous activity (sales units up 59%) that pushed the sales volume to nearly double 2020’s total to $256 million, up from $131 million the prior year. Prices were particularly robust in the South Jordanelle area, where the median rose 19% to $2.8 million.

Heber Valley saw a modest 8% rise in the number of transactions with 39% higher sales volume, propelled by a median price that jumped 42% to $750,000.

More detailed information for most neighborhoods can be found here:

The condominium market in Old Town Park City continued to be solid with sales up 37%, with a comparable gain in median price of 13% to $675,000. Empire Pass was the standout neighborhood performer, with sales nearly quadrupling and driving the median price up 31% to $2.8 million. For the second quarter in a row, Prospector transactions dropped (10%), but sales volume grew (19%) as the median price popped 21% to $211,000.

In the Snyderville area, Canyons Village saw its sales volume drop despite 13% more transactions, largely the result of closings of lower priced new inventory at Yotelpad, which resulted in a lowering of the median sale price to $544,000.

In Wasatch County, Jordanelle Park, Deer Mountain, Tuhaye, Hideout, and Red Ledges all saw gains of 50% or more in total transactions, with Red Ledges leading price gains, up 33% to $875,000.

The standout neighborhood outside of Park City Limits was Sun Peak/Bear Hollow, where sales more than doubled, and the median price jumped almost 50% from $515,000 to $751,000.

More detailed information for most neighborhoods can be found here:

COST OF EXISTING HOMES vs NEW 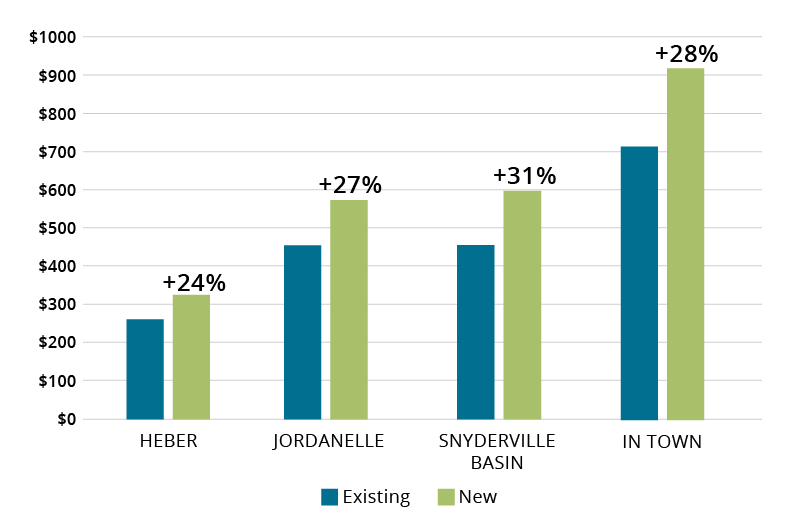 With the drastic uptick in lot sales this past year, our clients have often asked us to provide data regarding the pricing differential of existing homes versus new construction. We looked at the past year in our four primary market segments, noticing a common thread of new construction properties costing 25-30% more depending on the neighborhood and prevailing land costs.

TIME ON MARKET RELATIVE TO PRICE

If you are contemplating listing and selling your property, consider the balance between your pricing and absorption timelines. The data below weighs the time on market against the median price. It clearly demonstrates that those properties priced at or below the median are generally sold at a faster pace and in some neighborhoods, a significantly higher pace. Take note of the drastic reductions in time on market, demonstrating how quickly properties are being absorbed.

Absorption Rate: the number of months it would take to sell the currently listed properties on the market factoring in median list price. 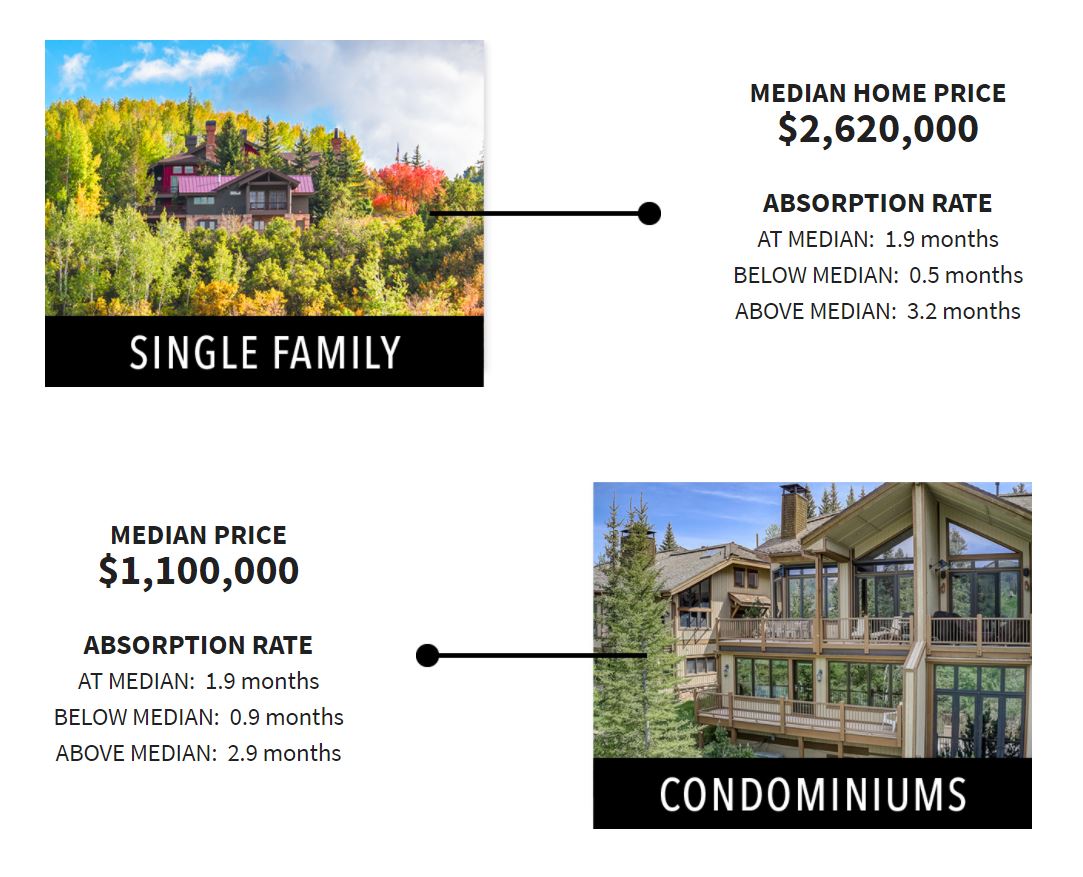 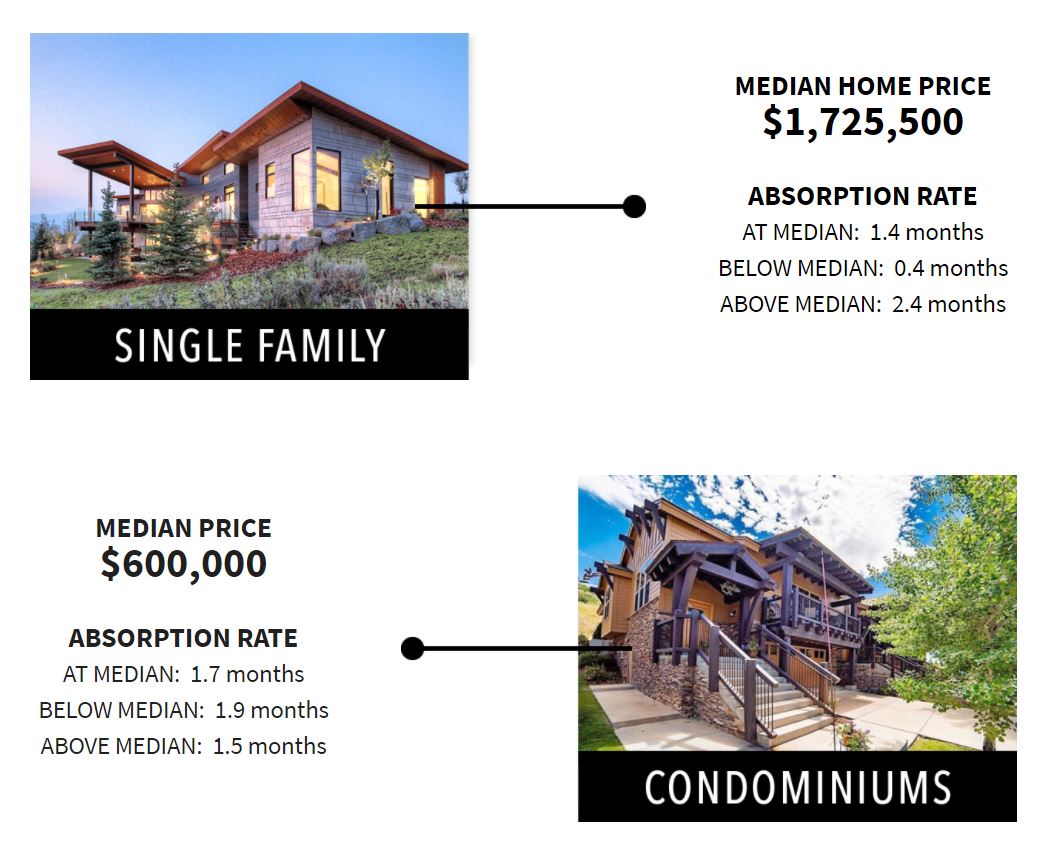 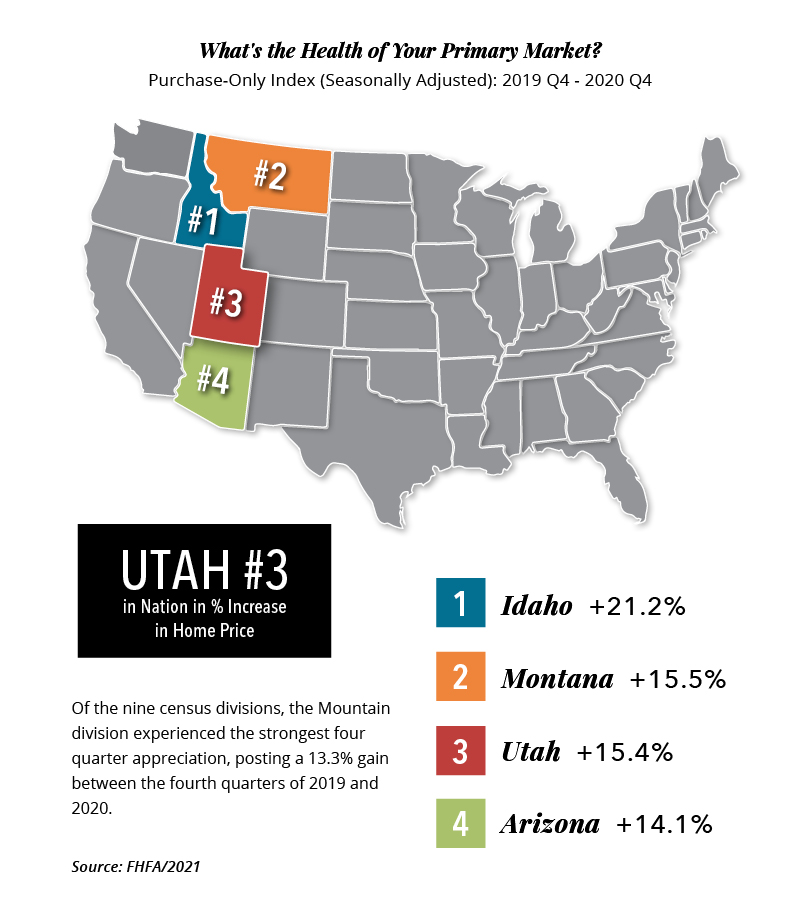 There is no argument the COVID-19 pandemic hurt our local tourism industry. Fortunately, the ski resorts had a very good season; not a record, but restaurants and local shops were able to open and stay in business. Slopes were busy, and restaurants pivoted and changed their table structure to accommodate social distancing. Now that spring is here, we are seeing a jump in outdoor dining, with restaurants getting creative in maintaining social distances by installing “igloos” to isolate diners. All in all, the local market is faring much better than many places elsewhere in the country.

As these statistics demonstrate, our markets are very robust, resulting in a challenging environment for both buyers and sellers. On the seller side, many properties are seeing multiple offers with unique deal terms that must be carefully evaluated. Buyers need to be more prepared than ever to move quickly, with most paying cash to beat the competition or being fully prequalified for a mortgage prior to submitting offers. We keep our finger on the pulse of our market to offer you the highest level of service. Let’s discuss your goals for this spring/summer season now. 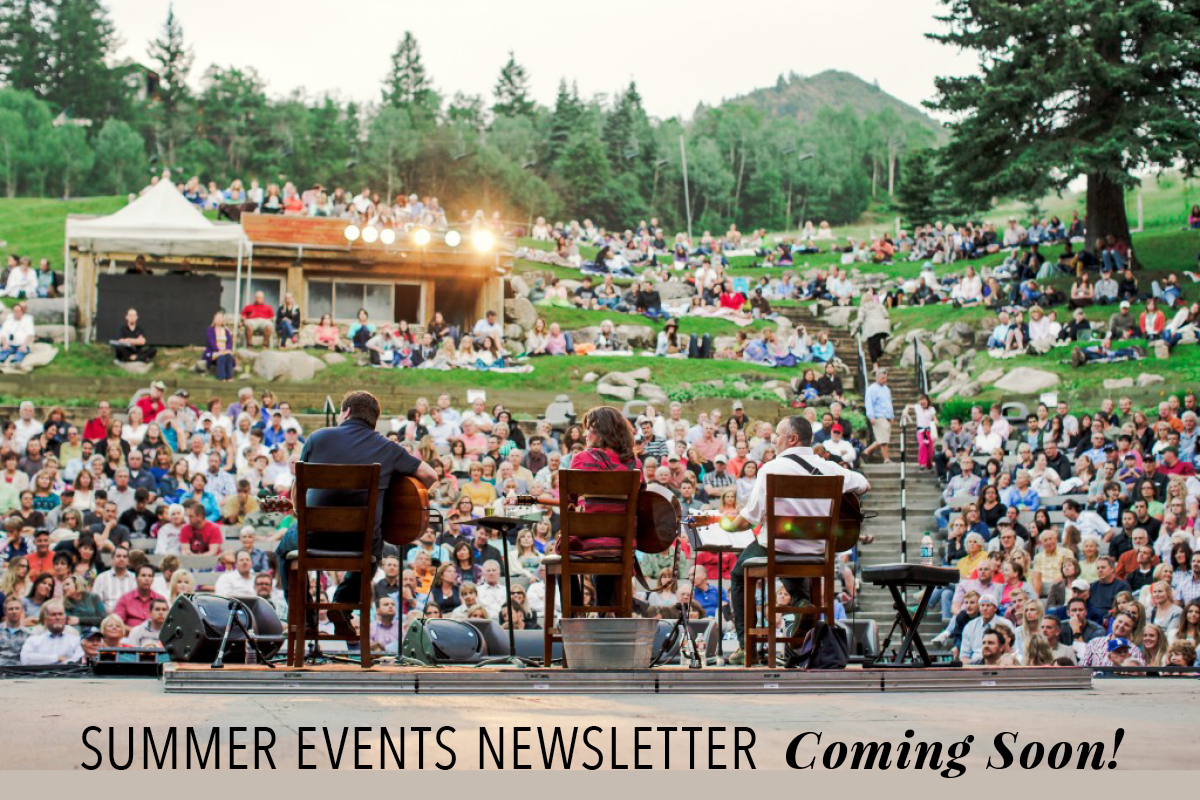